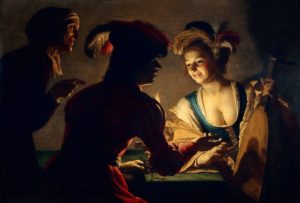 Oft quoted, frequently mis-attributed, this statement brilliantly captures the difficulty of writing about something abstract, what Ferruccio Busoni called ‘sonorous airs’ – the music itself.

There’s an over-abundance of writing about music today – academic, analytical, political, sociological, not to mention a wealth of criticism and reviews of concerts and recordings, ‘think pieces’ and celebrity interviews and profiles. But this article is not about these kinds of writing about music; it is about the difficulty of putting the experience of music into words.

Music resists being described in language because it is very hard to convey the abstract aural experience of sound in words. This is one of the things that I – and countless others – love about music: it goes beyond description because it is deeper than words.

The problem with writing about classical music is that the artform has existed for too long in a rarefied atmosphere apart from other musicks. Tradition and reverence have surrounded classical music in an aura of “specialness”, a distinction which is still continually emphasised by the specialist language and vocabulary used when talking or writing about music. Unfortunately, for many people this kind of specialist technical language is often in accessible and off-putting; it also contributes to the notion that classical music is “elitist”. Until fairly recently, the way music was written about in newspapers, magazines, programme notes and even CD liner notes was either incomprehensible or little use in helping the reader decide whether or not to explore a particular work.

For the general listener, would-be audience member and classical music ingenue, the only way to write about music in a way which brings it to life is to write from the heart. This may sound rather fey or simplistic, but music is about the full gamut of human emotions and experience. We don’t engage with it because it is scholarly, rarefied or elusive; we engage with it because it elicits an emotional response in each of us. It therefore seems incredible how politely we often present this extraordinary, heart-stopping artform to its potential audience.

To write convincingly about music, one must engage in lateral thinking to create startling images and metaphors to describe the indescribable in a way which somehow conveys the emotional impact the music has on the writer and brings the experience of hearing it to life for the reader. (Perhaps the greatest compliments I have been paid for my concert reviews is “you made me feel as if I was at the concert with you”.)

But there’s more, for in addition to the emotional experience, one must also try and capture the aural one. What does the music sound like? Musicians have a common language of terms such as legato, staccato, portamento, pizzicato to direct them to the sound effect the composer desires, but to the non-specialist listener/reader translating staccato simple as “detached” (its literal translation) is not sufficient. Staccato can be light, delicate, punchy, percussive, crisp, snappy, spiky…. Similarly legato (literally smoothly or connected) is not confined to one simple description. Then there are the instruments themselves, each with their own distinctive voice: strings which tremble and shimmer, bright metallic brass, the lustrous and mellow clarinet, the growl of the lower bass of the piano…

Many of the words used to describe music are drawn from other walks of life – art or nature, for example – to create metaphors for the experience of hearing and playing the piano. The language of architecture in particular can be useful in describing music’s structures and motifs: arabesques, curlicues, filigree, arching, soaring. Or more physical terms: bouncing, jogging, stamping, limping, dancing, throbbing, breathing, sobbing. Or adjectives drawn from weather: showering, thunderous, misty, dripping, rumbling, splashing.

We often talk about ‘colour’ in music, often in relation to dynamics, from the most delicately nuanced pianissimo to bold fortissimos – and all the subtle shadings in between. Then there is light and dark – ‘chiaroscuro’ – bright, hazy, shimmering, veiled harmonies, plangent tenebrous chords…

Thus the writer must find metaphors and adjectives which amply describe the structure and sounds of the music, the experience of hearing it and the emotions it aroused in a way which captivates the imagination of the reader and avoids clichés. Herein lies the difficulty: an overly liberal sprinkling of adjectives and metaphor can obscure the meaning of the words – and also the music – resulting in florid, purple prose, such as this:

For those of us who write about music, we face the challenge of whether words can really convey music, or if music can be revealed through the medium of language. The secret of any good music writing, whether it’s a puff piece in a concert programme, an in-depth piece of analysis, a programme note or a review of a concert, is that should make you want to hear the music (or make you glad you didn’t have to hear it!). Either way, the writing should invite and inspire and pique your aural curiosity, not baffle or alienate.